What to do on a cloudy day? If you are not afraid of a little bit of rain, a visit to one of Croatia’s most enchanting National Parks might be something to think about.

On one such day, we’ve to decided to do just that. Since we’ve previously visited Skradinski buk, this time around we chose to take the route Visovac – Roški slap / Oziđana pećina – Skradin. Even though in the off-season there are no boats taking visitors to Skradinski buk or Visovac (except on Sundays, for the church mass) it was still worth the ride, just for the view. 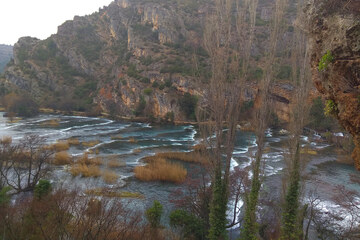 A narrow canyon with steep cliffs high up to 200 meters spreads like a 450 meters wide funnel in front of Roški slap. The 650 meters long waterfall, with the total drop of 25,5 meters, consists of series of small cascades (called “necklaces” by the locals) and a 15 meter high waterfall. Besides 7 species of fern and 377 species of spermatophyte growing there, at Roški slap you can also find 121 bird species, 58 of which are included on the list of endangered species. In addition to the cold facts, it is just a perfect place to get away from the everyday frenzy. 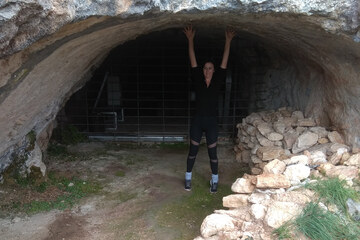 A place of exceptional cultural and historical value. Archaeological research has confirmed the presence in the cave of all Neolithic cultures in the Adriatic area, then Eneolithic, and those of the early and middle Bronze Age. Man was constantly present in the cave from 5000 to 1500 BC and, when visiting, you can see an archeological collection of objects found on site. “Fortunately”, the cave is also closed in the off-season which gives us an excuse for another trip.